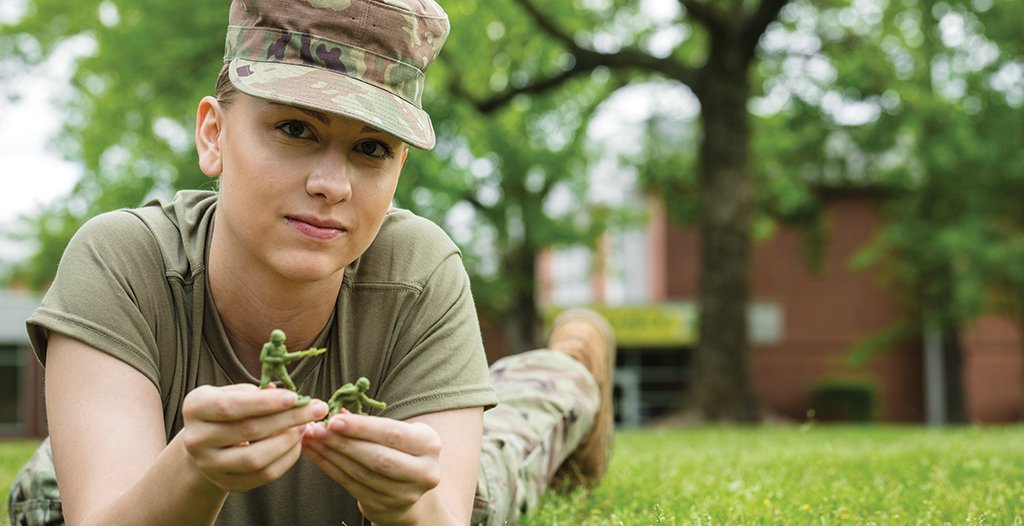 Sitting down with Hannah Lomax — an Arkansas Tech University student double majoring in biology (pre-med) and music performance, Army National Guard member, Miss Arkansas contestant, and thoughtful citizen — at a downtown coffee shop, I learned a great deal about her determination and grit. We talked about her passion and her drive to do so many varied things at an early time in her life.

A pattern became clear: Hannah does not take the easy road anywhere.

Hannah’s passion and enthusiasm is tempered with balance. As an E4 Specialist, Hannah has performed as an Army Bandsman since the middle of her senior year of high school. Playing the French horn with the Army National Guard 106th helps pay her university tuition and fees. ”My job is to go down to Camp Robinson in Little Rock once a month and drill with the 106th Army Band,” Hannah says.

The decision to join the military was an easy one for Hannah. Her father and both grandfathers served. Hannah’s father was a Navy corpsman (enlisted personnel with specialized medical training). Her grandfather on her mother’s side served in the Air Force and her paternal grandfather was as an Army Bandsman.

“I always grew up with that idea that this was an option,” Hannah says, “because I looked up to all three of these men so much.”

When Hannah visits classrooms to speak, she leaves each child with a toy female soldier as a reminder that girls serve our country, too. She was inspired to do this by the toy soldier given to her by her drill sergeant, as well as young Vivian Lord of Little Rock who wrote a letter to BMC Toys asking them to manufacture Army women figures.

But there’s much more to Hannah than fatigues, French horns, and toy soldiers. Now officially a junior at ATU, Hannah wears the crown of Miss City Lights, a preliminary title that makes her a contender for the crown of Miss Arkansas.

“Miss City Lights is a new title they created because the pandemic pushed Miss Arkansas back a year,” Hannah explains. “They still had leftover scholarship dollars and they didn’t want them to go to waste. So my title and a couple of other titles were nicknamed the pandemic queens,” she laughs.

Having won the title in February, Hannah will compete in the 2021 Miss Arkansas with 51 other young women. While she has participated in pageants before, Miss City Lights was her first title in the Miss America pageant system. She did, however, reign as Miss Pope County 2018, which is a part of the State Fair pageant and scholarship system.

When asked how she knew she wanted to come back to pageants, her quick response was easy. “It was the friendships and bonds that I made with the other contestants,” Hannah says. “How it’s portrayed on TV and social media sometimes is so far from what it actually is. I still talk with several of the girls that I first met.” Hannah expounded adding that she has a continued friendship with the Miss Pope County, Madison Alexander. Madison, who is now Hannah’s makeup artist, has pursued cosmetology.“She has become my go-to girl,” Hannah says.

While Hannah plays French Horn for the ATU marching and symphonic bands, she performs a piano arrangement, Be Thou My Vision, for her talent competition in the pageants. “I have found as an instrumentalist,” Hannah says, “that it’s really hard to portray skills at such a high level to people who are unfamiliar with it.”

Having strong musical talent and the ability to pick up an instrument and learn it quickly, Hannah tried one thing after another in searching for a competitive talent to use in the preliminary competitions. “Nothing I tried fit until I heard this piece played by the composer,” she says. “Now it’s been six, eight months later and I’m still in love it. Musically, it’s a gorgeous piece. It just draws me in. I can feel my soul rest in peace listening to it.

“The other attachment (to the music) is because I was raised in church. I love the organization and the outreach that it does,” Hannah says. “ It’s an amazing thing. Be Thou My Vision is an old hymn that I used to sing while growing up in church. So it ties into my memories of my childhood.”

With regard to recent changes in the Miss America pageant system, Hannah says she is behind them. The pageant system only recently has had female leadership. Current CEO Shantel Krebs follows on the heels of Regina Hopper, known for the competition’s swimsuit-less rebranding.

“At first it was a shock because this pageant originally started in Atlantic City as a swimsuit competition,” Hannah says. “Over the years it’s changed and evolved to match our society. Personally, I totally agree with them deciding to step away from the swimsuit portion of the competition and dissolve it completely because now with Miss America 2.0, it’s truly more of an intellectual-based competition. The interview is weighted more. They added a new portion called the social impact initiative, which is where we give a short summary on stage in our evening gowns about our social impact, what it is and what we’re doing with it.”

Hannah also approves of the changes at the national competition that include a lengthier on-stage interview in their interview attire. “It’s really cool,” Hannah says, “and it’s also just really empowering.”

Unlike her talent piece, Hannah’s interview topic was not hard to choose. Her platform, Letters of Hope, is personal. “The birth of it was when I was in basic training in the summer of 2019,” Hannah says. “Receiving letters from home while you’re at such an important life moment and a hard thing to do, it is your lifeline. It’s the only contact we have with the outside world. We got four 10-minute phone calls throughout a two-and-half month period. So we really relied on the words from home to keep us going.

Hannah says mail call was the highlight of the day at boot camp. “It’s like when you’re five-years old and it’s Christmas morning,” she says. “You cannot wait to go open these presents and see all these wonderful things. I just remember pouring over these words from home. I would stay up late at night using  a flashlight to read and write back. That was my lifeline. It was something I really couldn’t have done without. So, it really broke my heart when I would look around and see other individuals I was going through this with, and really leaned on to help each other through it, who wouldn’t receive any support from home. After I got back home, it stuck with me. I never moved on from it.”

Similar to her interview topic, Hannah’s social impact initiative is Operation Gratitude. Hannah has become their voice in Arkansas.

The organization hosts letter drives and care package drives for our country’s servicemen and women — recent boot camp graduates all the way through veterans, both stationed and abroad. Operation Gratitude serves our nation’s first responders as well.

Hannah is preparing to hold a letter drive at Cedarville Elementary in just a few days. Her initiative to bring comfort to those serving was clear. “I’ve kind of put myself as this bridge, Hannah say, “because there is a gap between our society and our military.”

While Hannah is an accomplished musician, her ultimate goal is to become a physician. She’s currently pursuing a biology/biomedical degree using scholarship monies from the pageant system. Hannah plans to attend med-school after her undergraduate degree is completed. UAMS and Baylor School of Medicine are her top choices. A doctorate of medicine from either will allow her to work as a family physician.

“This is also why I decided to compete in the Miss America pageant system,” Hannah says, “because they are the top scholarship provider for women across the country. It opens so many doors for young women growing up in today’s world.”

Hannah says she has always loved the sciences. She is looking forward to classes and particularly chemistry. “I get to take my first organic chem class this fall,” she says with clear anticipation.

Managing two completely different majors has been quite an undertaking. Hannah has been focusing primarily on her music classes thus far. Pursuing degrees means Hannah takes 17 -18 hours per semester along with a full schedule in the summer. But she says that she has completed almost 90 percent of those classes and now she gets to pickup on her other major. She is rewarded scholarships for both music and academic performance.

How does Hannah maintain her diverse and intense interests?

Hannah will compete in the Miss Arkansas competition the week of June 13. While I hope she wins, I somehow think either way that she will have already accomplished what she had set out to do — to see where her future takes her.l

If you would like to organize a letter drive for our nation’s military, send a message to Hannah at hanelomax@gmail.com.