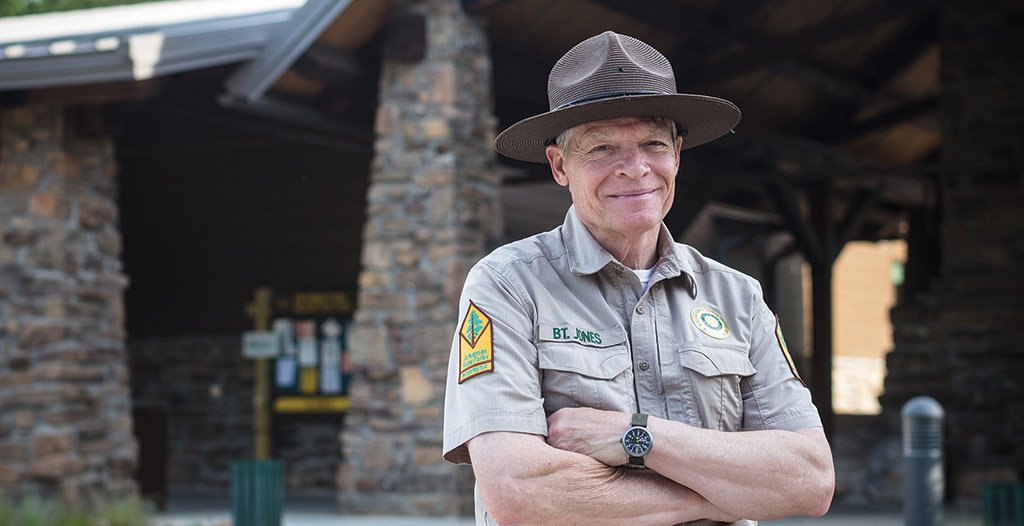 1) What is your favorite book?
A single favorite is difficult for me to pin down. One classic that park interpreters tend to return and read again and again is A Sand County Almanac by Aldo Leopold. The author’s observations on nature and land use are widely accepted to be time worthy and wise. I also often return to Jane Goodall’s Reason for Hope: A Spiritual Journey. The volume is largely autobiographical and full of perceptive thought.

2) Dog or cat?
I’m a dog person, but that is not to say that I don’t like cats. I love animals in general. Dog preference is classic: given a fair chance, they make you part of their family and their allegiance is unmitigated. As for cats, I think Rooster Cogburn put it well when talking about the cat General Sterling Price in the movie True Grit: “General Price don’t belong to me. He just rooms with me. Cats don’t belong to nobody. ‘Course, I depend on him.”

3) What do you think is the most positive aspect of living in the River Valley?
We are blessed with an abundance of natural beauty and a diversity of outdoor activity for those who love to be outside. There are cultural opportunities for everyone as well.

4) What’s something no one would ever guess about you?
At first glance, I am appropriately polite and civil. Once we get to know each other, I can be demonstratively ornery.

5) What is your favorite music genre and artist?
Don’t shoot me, but I love classical music. It may have started with the Tom and Jerry cartoon in which Tom played a portion of Franz Liszt’s Hungarian Rhapsody with his toes. If I had to pick a favorite piece, I would go with J.S. Bach’s Toccata and Fugue in D minor, written early in the 1700s. Either on a pipe organ or with full orchestra, it’s a beautiful, powerful, slightly chilling experience.

6) What do you nerd out on?
Being a park interpreter, I am inevitably considered nerdy. We delve into nature, history, geology, and attempt to reveal such subjects in an agreeable fashion. I also nerd out on books and movies that make the mental gears turn. One example is the 2016 film Arrival. The main character is a linguist (not many of those in hero roles) who gains a hard-won and valuable knowledge of non-linear-time communication.

7) If you could change one thing about the River Valley, what would it be?
My first impulse is to say, if it ain’t broke, don’t fix it. But there is always room for improvement. Let’s be adaptable and open to a better future for everyone.

8) Where is the one location in the River Valley you would tell a first-time visitor that they must go?
Petit Jean State Park, of course.

9) Pizza, tacos, cheeseburger, or fried chicken?
All of the above? If you force my hand, I’ll pick pizza. Why? You can put anything that tastes good on it. At a French class party in college, I was introduced to Quiche Lorraine. My, that was good stuff. I’ve been a fan ever since. In 1982 a humorist named Bruce Feirstein wrote a book called Real Men Don’t Eat Quiche. When I saw the title, I simply said: “So be it.”

10) What is your favorite quote?
Maybe it’s this one, from Jane Goodall: “We have the choice to use the gift of our life to make the world a better place.”