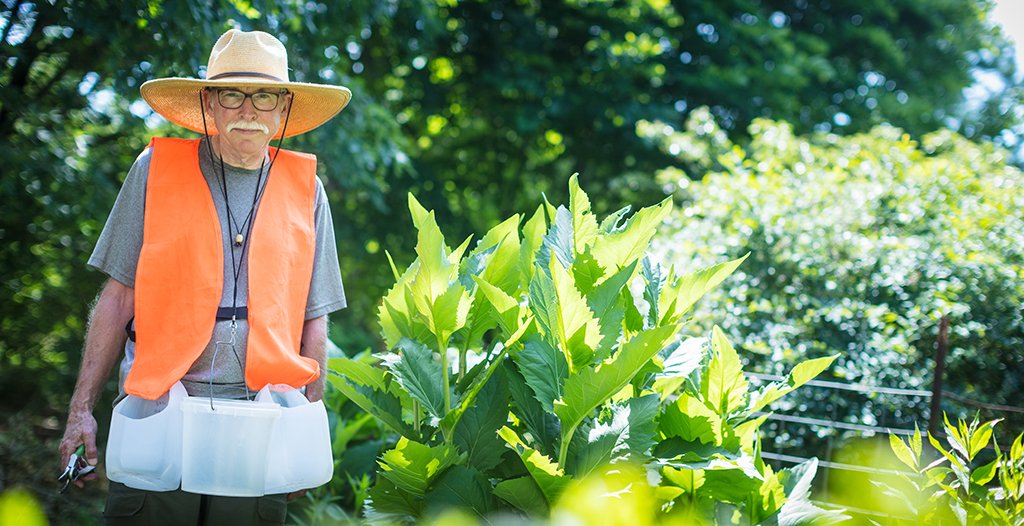 Prairies are a breathtaking and vital ecosystem in Arkansas. They are also a source of biodiversity in a world severely lacking in such. The colorful fields blanketed with wildflowers are the result pollinators. But in recent decades, we have seen a sharp decline in both pollinator and native plant populations. If these communities were to go away completely, plant diversity would continue to dwindle, eventually devastating our agriculture.

The monarch butterfly is, perhaps, the best known and most easily recognizable pollinator in the Americas with its bright orange wings outlined in stark black and speckled with white. They have also caught our eye with their phenomenal transcontinental migration cycle that takes up to four of their generations to complete. Up to 500,000 butterflies migrate down to Mexico where they roost for the winter months and they return north once the cold has passed. But the monarch species, and its migration, are at risk. The North American population has dropped by approximately 90 percent in the last two decades. Curiously, the monarch is not a federally protected endangered species. According the the United States Fish and Wildlife Service (USFWS) website: “On December 15, 2020, the USFWS announced that listing the monarch as endangered or threatened under the Endangered Species Act is warranted, but precluded by higher priority listing actions. The decision is the result of an extensive status review of the monarch that compiled and assessed the monarch’s current and future status. The monarch is now a candidate under the Endangered Species Act; we will review its status annually until a listing decision is made.”

A lesser known pollinator that is already protected under the Endangered Species Act is the rusty patched bumblebee. Historically, the rusty patched bumblebee had a broad range across North America, occupying 28 U.S. states and parts of Canada. It now inhabits less than 0.1 percent of its native range. In 2017, it became the first bee in the contiguous United States to be declared endangered. The loss of this large group of pollinators would have drastic and devastating impacts on our landscapes and other species that inhabit them.

Ironically, agriculture is one of the culprits of the declining pollinator population. Pesticides coat the crops they pollinate and infect and decimate the populations of the hives. Overuse of land and a lack of biodiversity is a large reason for the habitat and diet loss of pollinators. Approximately 79 percent of North American grassland prairies have disappeared over the last two hundred years. Arkansas once had over a million and a half acres of prairies and glades where pollinators had plenty of room to roam and more plant diversity for their diet. We now have about one percent of that million and a half acres left and the average prairie has only about 300-350 species of plants. The average yard, depressingly, has around three. Monoculture has become the norm and, as a result, one of the most important groups of organisms on the planet no longer have the proper tools to carry out their vital purpose.

But people who embrace native biodiversity are working to restore the lands to their natural states.

Larry Price has had an affinity for the natural world since he was a child when he would explore the forest with his grandfather and brother. Larry graduated from UALR with a degree in biology with an emphasis on botany. From there he went on to graduate from UAMS with a medical degree and began his practice. Larry practiced in Mt. Ida, Mena, Russellville, and he practiced emergency medicine at hospitals across the River Valley before retiring five years ago.

During his career in medicine, Larry’s passion for nature was never pushed aside. He joined groups such as the Arkansas Native Plant Society, the Nature Conservancy of Arkansas, and Arkansas Master Naturalists. Larry’s involvement with the Master Naturalists introduced him to Project Wingspan and he quickly volunteered for team leader in his area.

Project Wingspan is hoping to undo some of the damage the pollinator population has endured. It is a three-year plan headed by the Pollinator Partnership funded by grants from the National Fish and Wildlife Foundation. Its goal is to reclaim and rehabilitate 15,000 acres of pollinator habitats across eight states by locating and tagging existing prairies, collecting native seeds for planting new wildflower prairies, and wildlife management. The efforts are in hopes to save the monarch butterfly and remove the rusty patched bumblebee from the endangered species list.

The process begins with scouting. Larry normally handles this responsibility alone. “I go out and drive up and down the road, looking at the side of the road, and my goal is to find the flowers in bloom,” he explains, “while trying to maintain control of the vehicle, of course.”

Larry has a list of 24 native species to search for, but he’s only found about a dozen of those species available in the region. When he finds a plant on his list, he determines when would be the best time to come back and check for seeds. During his second visit, Larry studies the plants to determine when the seeds might be mature and ready for harvest. All of this scouting means he travels extensively across the region.

“Last year for scouting I drove 3,517 miles,” Larry says. “Of course, I drive an electric car, so I wasn’t adding much carbon into the air.”

Most scouting and collecting is done along highways and protected native prairies like Cherokee Prairie in Charleston. “I actually decided to contribute some of my acres to the project as well,”Larry says. “This year I planted not only 1.6 acres of wildflowers but I’ve potted about 400 wildflowers.”

Once Larry has located the wildflowers and determined when they’ll be mature, he shoots an email to his team letting them know the time and location of their next harvest. Most harvests last around two or three hours. The volunteers spread out around the region and collect and store the seeds. Last year, the River Valley team collected 10 pounds of seeds.

After a day spent among the flowers, the volunteers take their pickings home to be dried and packaged. “I’ve got a drying table with a fan and I spread them out on the drying table on some newspaper or butcher paper,’ Larry explains. “They’ll dry under a fan for anywhere from three to seven days generally, depending on the seed.”

When they’re all dry, some seeds require sifting to remove them from the hulls, and then they are packaged to be shipped to a nursery in Illinois. At the nursery, they are cataloged and stored for use in future restoration projects like Habitat for Wildlife and the Arkansas Native Seed Project. It’s important to harvest these seeds and save them in banks because if released in the wild, the seeds might not make it to an area that is viable for growth.

Campaigns like Project Wingspan could not become reality without the devoted volunteers who invest their time in our planet and our futures. “I just want to thank my team and I’m really appreciative of everything they’ve done.” Larry says. “It’s nice to know that there are people who are dedicated to those services.”

If you are interested in becoming a volunteer for this project, visit https://pollinator.org/wingspan. If you want to improve pollinator habitats in your area, but don’t have time to volunteer, you can focus on keeping native plants and wildflowers in your yard, allowing a space for them to grow, and letting the pollinators to do their work.