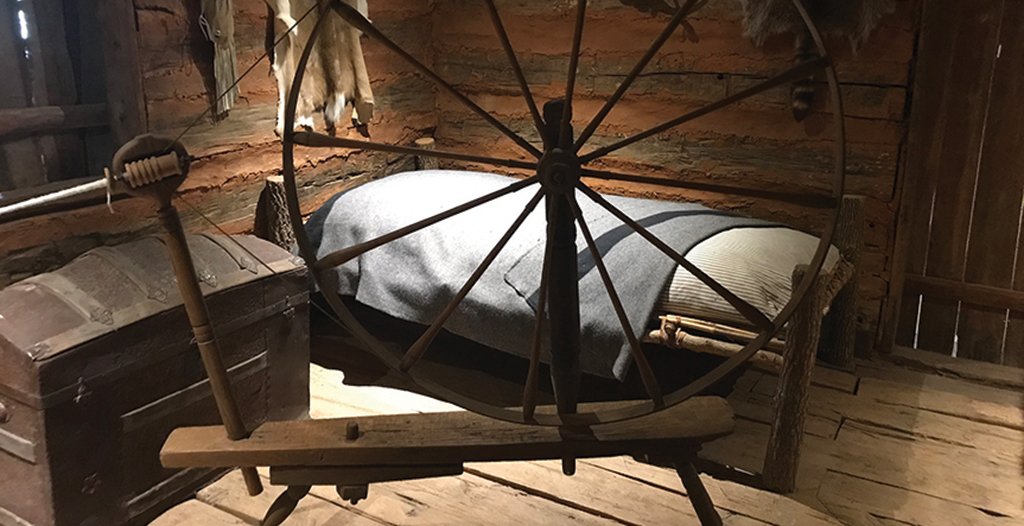 Last week our family went on a short getaway to the Sallisaw and Fort Smith area. While there we went to see Sequoyah’s Cabin Museum. Sequoyah — also known as both George Guest or George Gist — was the creator of the Cherokee alphabet. Born in 1770 in present day Tennessee, he worked as both a silversmith and a blacksmith, fought in the war of 1812, and played a variety of vital roles in supporting traditional Cherokee culture and territory. This cabin site, now owned by the Cherokee Nation, sits on 10 acres area near Akins, Oklahoma was home to Sequoyah’s and his wife Sally’s original cabin, which was built in 1829. In the 1840s, Sequoyah travelled south toward Mexico in search of other Cherokee communities. He died while traveling. But his wife stayed at the cabin for many years after.

Years later the CCC built a larger stone building around the cabin, all of which you can now tour. The site is home to a wealth of information about both the tribe’s history and current life. While there we learned that Sequoyah spent many years working on the Cherokee syllabary. Despite claims of the alphabet being a sign of “witchcraft,” he forged ahead and created the written version of the language that allowed the Cherokee to document their own histories. Today you can see the language used throughout much of Oklahoma and language revitalization schools are available for children.

If you are from the River Valley, you probably know about Sequoyah Elementary. That school is named after the same Sequoyah. He originally moved from Tennessee to this area in 1824, most likely to to get away from the advance of white settlers who were pushing for Cherokee removal from the state. He lived in the Pope County area for about five years, all the while working on the creation of the alphabet. Then he moved to the Sebastian County/Fort Smith area in 1828 and later on to Vian.

Sequoyah tried to use his resources to push for more rights for his people. But instead they were taken advantage of and forced out. Anne M. Early of the Arkansas Archeological Society writes about him in the Arkansas Encyclopedia: “He was in a delegation of western Cherokee that went to Washington DC in 1828 to resolve several issues with U.S. authorities, including land rights and boundaries in Arkansas Unexpectedly for the Cherokee, the delegation was pressured into exchanging its Arkansas lands for territory in what was then called Lovely’s Purchase, a tract that ran west of the territorial border into what is now northeast Oklahoma. Delegates received special considerations for making this agreement.”

Pushed out of Arkansas, Sequoyah and others received money and he received salt works on Lee Creek meant to replace the one he had operated in Arkansas. This exchange, the Treaty of 1828, ended western Cherokee settlements in Arkansas. It all took place a few years before the official start of what we now know as the “Trail of Tears:” a mass land grab and illegal theft of land from its rightful owners.

If you have been following the coverage of residential schools in Canada, you might be surprised to learn we had a residential school here, too. And it was also pushed out of this area around that same time. Dwight Mission, a presbyterian-run Cherokee residential school, eventually relocated to the area near where Sequoyah’s’ cabin sits today. It is important to note that Chief Takatoka opposed the school. But his brother, Ooluntuskee (also known as John Jolly) who later became principal chief, supported it. But even he had misgivings, making it clear that the religious teachings would rob children of their Cherokee identity. For years the school was operated by the Presbyterian Church, even up through last year. But we learned while in Oklahoma that the property had recently been purchased by the Cherokee Nation and would once again be controlled by the Cherokee people.

Dardanelle and Sallisaw are about 110 miles apart. It takes a little under two hours to drive from here to there. But on horseback it would have taken probably four to five days. Maybe even more. And no doubt it would have been a dangerous route. We spent a lot of time reading about Cherokee history while we were there, but, equally important, we tried to educate ourselves on who the Cherokee Nation is now. Despite the Trail of Tears, the Western Band of Cherokee (the Eastern Band is still located in the Appalachian area) is a vibrant, active nation, teaching the young people the language and making sure that signs throughout the nation are written in English, and thanks to Sequoyah, Cherokee. What do you know about Sequoyah and Dwight Mission? I’d love to hear more. l\