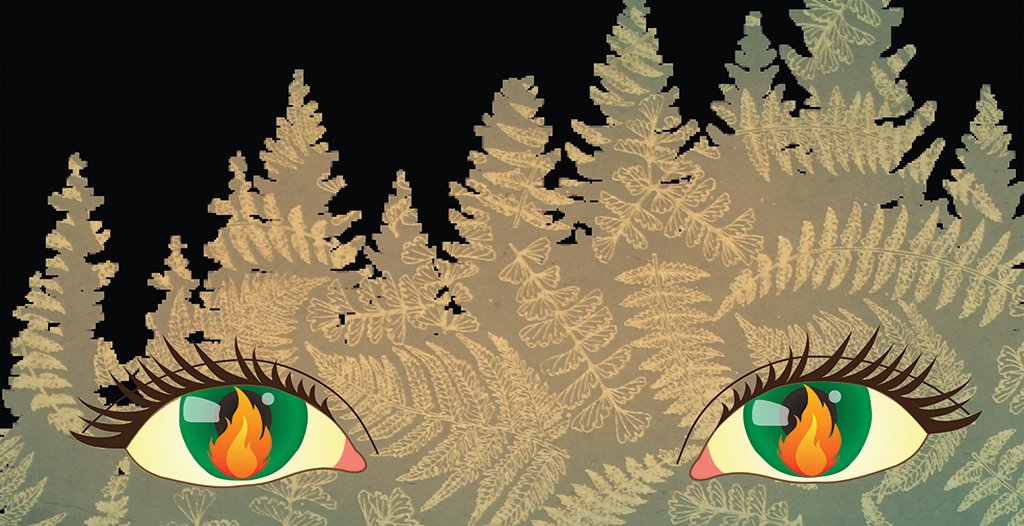 Orange flames from the backyard pit flickered in Rosa Lynn’s emerald eyes as the first day of summer unfolded into a soft June evening. Charles William was mesmerized by the contrasting colors. He had always been captivated by her aura, the red of an untamable inner fire complimenting a calm cool green.

The shadowed contours of Rosa Lynn’s full lips pulled softly into a coy smile. “Chuck Willy, you know how long I’ll love you? Longer than a whip-poor-will’s song, I will.”

Charles William grinned at the words like the teenage boy Rosa Lynn had fallen in love with so many years ago. She tugged at sprouts of his hair curling up from under a dirty baseball cap, and he playfully swatted her hand away as he stooped to place a fresh-split hickory log on the fire. The crackles and pops of seasoned wood were perfect accompaniment for the wild music of a summer evening. Cicadas sawed their melancholy songs as katydids chirped brightly from the oak boughs. And as a falling star streaked across the purple sky, Rosa Lynn leaned toward him for a kiss. As if on cue, a far-off whip-poor-will warbled it’s lonesome tune.

Then other, similar, though, dissimilar notes followed the night bird’s song. An odd, lazy piping filled with an immense and palpable sadness floated through the deepening night.

Rosa Lynn could identify nearly every species of bird in the state from voice alone. But this one was different. Not an owl and not quite a whip-poor-will. She stood and eased toward the wood line where thick tangles of honeysuckle perfumed the air.

“What is it, Rosa?” Charles William whispered.

“I heard that whip-poor-will. Is that what you’re talkin’ about?”

Danged if I know. Nothin’ from around here. Maybe some exotic bird blown off course by the storms last week,” she answered. “There it goes again. Hand me that light, and I’m gonna see if I can peek it.”

Charles William, chuckled, tossed the headlamp to Rosa Lynn and settled back into his lawn chair with a Mason jar. “And I’ll wait right here while you do.”

He watched as shadows swallowed the beam then tracked Rosa Lynn’s movements in the rustle of underbrush, the soft crunch of her steps on last autumn’s dead leaves.

And then, more quickly than he thought possible, the sounds of her faded into the forest hum.

“Rosa Lynn, you find that bird yet?”

Only the katydids replied.

He walked to the forest edge, eyes straining for a glimpse of light and ears filtering through the buzz of night life for anything that could lead him to her.

Charles William stumbled into the woods, guided only by the soft beams of a quarter moon and a growing uneasiness tightening his stomach. >>

Days of searching turned into weeks as authorities from all over the state converged on this lonely patch of woods in a forgotten corner of the world. When the county sheriff finally called it off, everyone except Charles William agreed that it was over, that she was gone forever. But no one knew how or where. Rosa Lynn had seemingly vanished into thin air. She disappeared in a small hollow just behind her home of more than a decade, in woods she’d known since childhood. And she left not one trace behind. The only clues were her found headlamp and a handful of feathers that not even the state wildlife biologists could identify.

That discovery led to hushed conversations among the elder locals, those most familiar with the heritage of their neighbors.

There were stories, a lore that had followed Rosa Lynn’s family from Appalachia to the Ozarks, of a feathered entity more spirit than flesh. Tales of a soul taken from every generation as a precursor to the death of that soul’s mortal lover. No one knew why; the reasons had been buried or forgotten long ago. Perhaps it was atonement for an ancient debt in her bloodline to an ancient deity, a curse passed down from transgressions centuries old. Or maybe it was simply a cosmic tragedy.

Charles William did not know of this history, and Charles William had never been known to have an ounce of quit in him. But the months of sun and desperation wilted his body and vaporized his vigor, and the days rolled over him in a quiet agony. By late September he was a hollowed man, weathered and dried up… a husk.

Finally, cool October breezes pushed summer from the hills. The last string of long, hot, and terribly bright days had given way to damp grayness as the verdant woodlands slipped into tones of umber and ochre seemingly overnight. The cold front’s leading winds had stripped some of the canopy, depositing a fresh carpet of leaves on the forest floor through the morning. But a calm had settled into the hollows this afternoon. And on this day, Samhain, the Celtic day of the dead when the veil between this world and the next was thinnest, Charles Henry decided to search for Rosa Lynn one last time.

He padded through the drizzle, weirdly invigorated by the dampness, scanning every shadowy crevice in rock and brush with what he thought was a long-lost energy, straining with eye and ear, with every nerve and cell for even the smallest clue that Rosa Lynn could still be here. But in the perpetual twilight of mist and fog, the grim darkening of coming night crept upon him unexpectedly. And as a crimson sun dipped below the lidded ceiling, Charles William thought it best to head home.

Charles William paused mid-step and stumbled to the wet ground.

He couldn’t at all be certain, and he couldn’t gain a bearing. The haunting tones, so familiar yet so strange and sad, fluted through the bare branches from everywhere and nowhere. The desire to find their source welled within and spilled from his eyes.

He called out again. The reply came back with a crystalline certainty.

A new hope pulsed through his being, easing the ache that had settled in his core like a smoldering ember for what seemed forever.

An ancient and burly post oak silhouetted high on a ridge top in the gray seemed to summon Charles Henry as his wife’s voice echoed though the hollow. He ran — stumbling, falling, crawling through the understory toward the old tree, reaching it breathless. Jutting from the ridge, the oak’s gnarled roots twisted through stone older than life, clinging with primeval tenacity to an abrupt precipice. An immense canyon of black opened up below the bluff line. And in the far far bottom, the colors of flame and emerald glimmered in the gloom.

“Rosa Lynn, I found you! I knew that I would! I knew you were here! I knew you’d never leave me! ”

Charles William grabbed onto an oak root snaking between boulders and swung to a ledge as the last of this day’s weak light faded. His eyes scanned the weathered and mossy stone bluff for the tiniest jut of rock, anything to ease his descent. His mind gripped by urgency and elation could not recall this hollow, this bluff, this tree.

From the bottom of the hollow, the glowing red and green orb shimmered.

And as the months and moments since Rosa Lynn had vanished bore down on Charles William with a weight and density he could shoulder no more, he leapt into the darkness… to the light… to his Rosa Lynn.

He landed in a crumpled heap, alive but barely, and called to Rosa Lynn with a gurgling gasp. Flashes of supernatural pyrotechnics in crimson and clover illuminated the shadows. Turning his head with great effort and immense pain, he watched the sphere of unearthly fire rise and float through the forest as if on wings, lighting lightly at his side.

The orb was an eye, a great red and green marbled eye set deep in the mossy-feathered head of a strange bird. It was a creature unknown to Charles Williams. But as he stared into the eye, a knowing calmed and comforted his foggy mind like a warm blanket.

The bird sat in silence and unmoving. Her eyes molten and glowing embers in the blackness of the hollow through the darkest hours of night.

As sleepy pink rays of sun peeked over the distant hills, the green fire subsided and the eyes became onyx. Blinking in the soft early light, the bird sank into the shadows, its feathers becoming indistinguishable from leaves and lichen. Above the naked trees, a clean and bluing October sky stretched infinite.