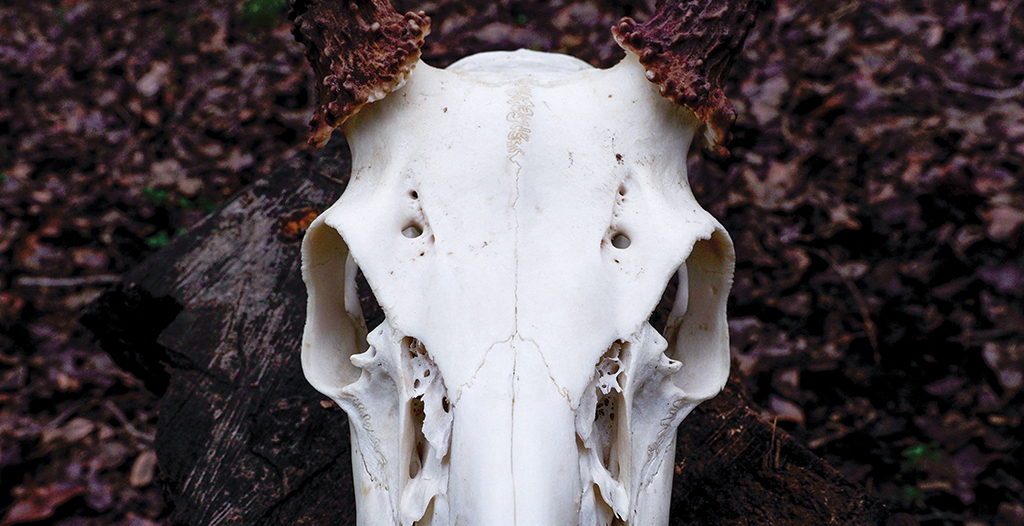 I’m a little squeamish when it comes to handling eyeballs and brains. You’d think that after dismembering hundreds of carcasses — cutting into both warm and cold body cavities, pulling out intestines, livers, kidneys, hearts, lungs, etc. — I’d be more stoic in the matter. But those eyes, the window to the soul as Shakespeare said, and that gray matter where the soul (or what we think is a soul) resides, trigger uncomfortable emotions.

The deer who owned the eyes are brains I’m handling has been dead for more than a month. We met, and I killed him, in the mountains near my home. It happened in a grove of white oaks, green-leaved and loaded with acorns, as the first rays of an October dawn bathed the forest in pastel pink and orange tones. He saw me perched in the oak with these eyes, watched me as I drew ragged breath and the arrow that would pierce his lungs and heart.

We civilized humans have created a narcissistic myth that our own deaths are a tragedy beyond comprehension. Coming to grips with the reality that one day I will simply cease to be, that the organic shell housing my soul or spirit or simply consciousness will be reduced to food for something else (boring as it is, microbes and fungi most likely) is inconceivable. I simply can’t imagine a world without me.

But to the uncivilized world, death is the most ordinary of events. Beings die everywhere and all the time. They’re dying in the forests and seas, on the plains and in the mountains. They’re dying on farms and in yards, in your very home at this very moment. Death is the mechanism for life, returning base components back to the system where they’ll be formed into something else. Every other living thing on the planet seems to know their position in this solar-powered recycling, that the individual alive now is but a temporary placeholder for the individual to come. Anthropologist Paul Shepherd writes of this “knowing” of the prey animals, those primary consumers in the trophic pyramid, and the predators who depend on them as literal conduits of light:

“The dream of perfection of the soft-eyed deer and the singing grasshopper is to burst like a small sun into the blood of the wolf and the bluebird, who surrounded by prey, accept each bite as a gift from the sun-parent.”

I can’t say for certain that this deer dreamed of me eating him, but there was a recognition, a palpable knowing in the cool autumn air that morning. The moment of intersection unfolded as though our fates had been intertwined since our births.

He bolted with apparent vigor when the arrow found him, and I thought I’d missed. But blood leaking from his wounds, splashes of a most urgent color, led me to him moments before he died. I was there as the soft golden glow faded from his eyes. I wiped the tears from my own.

And now, morbid and barbaric as it sounds, I want his skull near me. Not as a trophy. Think of it as a talisman, a connection to the wildness that the deer exists within, that we humans once fully belonged to but now experience only as outsiders. We’re domesticated shadows of our former predatory selves, but his skull will be a reminder of my blood bond with the deer. It’s a relationship that’s been consummated by death and digestion through countless generations dating back to prehistory.

The only way I can keep this sacred object in our home, without the putrid smell of decay attached to it, is to get rid of all the soft tissue. I’ll spare the specifics, but after the initial skinning and removal of eyeballs and brains, the rest of the process isn’t so bad. When it’s done, all that’s left is bone.

Bone isn’t the uniform white color you might think it is. Not a freshly boiled and scraped skull, anyway. Instead, it’s tinted with the softest grays and browns, the muted hues of the tendons, ligaments and cartilage that once worked with muscle to articulate and animate but now removed leave their subtle shades behind. The skull’s aesthetic, from a distance, is smooth simplicity. But a closer look reveals nuance with purpose — the various openings for nerves and blood vessels; the tight fit of small, rotating bones that attach ear-butt to skull; the acorn-stained ridges of teeth. A skull is a jigsaw puzzle of form and function guided by evolution. Calcium phosphate and collagen combine to form everything from load-bearing structures and levers to the more delicate, lace-like framework of the nasal cavities.

The deer’s brain isn’t wired like ours so its protective housing is different as well. But there are striking, though, not surprising similarities, too. We did, after all, share a common ancestor with the deer nearly 65 million years ago. Evolutionarily speaking, successful components tend to endure across species.

My eyes focus on the hole where the deer’s optic nerve connected his brain to his eye. I try to imagine the sights, the emotions of life as prey. I try to imagine my ancestors from more than four million years ago on the savannas of eastern Africa who knew this position in life as their own reality.

Somewhere along those four million years separating us from Australopithecus afarensis, we left our shared station with the deer and grasshoppers and sided with the wolf and bluebird. Our shift came about because the combination of genetic gifts — bipedalism, an opposable thumb, and a marvelously complex brain — handed down from evolution proved to be an incredibly effective, though unlikely, formula for an apex predator. Especially that brain.

The most distinct characteristic of the top and back of the deer’s skull are the squiggled joints called sutures. Sutures allow skulls to flex, protecting the brain during birth and after as it grows. We have them and need them even more than other animals. A human is born with a huge, outsized head compared to our bodies. It must pass through a relatively narrow opening at birth and then our clever brains continue to grow for another 25 years.

One of the deer’s sutures snakes along the very back of his brain case. The other two start under each antler, nearly encircling the bases, before they meet in the exact middle of his head. The sutures loop and wind in a primal calligraphy across the frontal lobe. I trace their tight meanders, trying to read the ancient cursive like a blind man reads brail.

But I don’t feel prose through my fingertips. It’s something more poetic, lyrical, melodic. It’s a song, perhaps the same one Aldo Leopold spoke of when he said that “to hear even a few notes of it you must first live here for a long time, and you must know the speech of hills and rivers.”

It’s a song that’s reverberated through the eons in cycles of sun, moon, wind, and rain. The notes stretch from the long ago then to the now and beyond for as long as life survives on this planet, moving to the rhythm of innumerable heartbeats, the pulse of blood through artery and vein.

I trace the sutures as they flatline down the gentle slope of his nose with the somber realization that my voice is part of this primeval song, no more no less than the deer’s. We are both caught up in the music, sustaining the harmony our ancestors began long before us. The song is inescapable.

My fingers leave the buck’s bones and explore the ridges on my scalp. I feel for the music written on my own skull. I wonder when and what my death will be. 