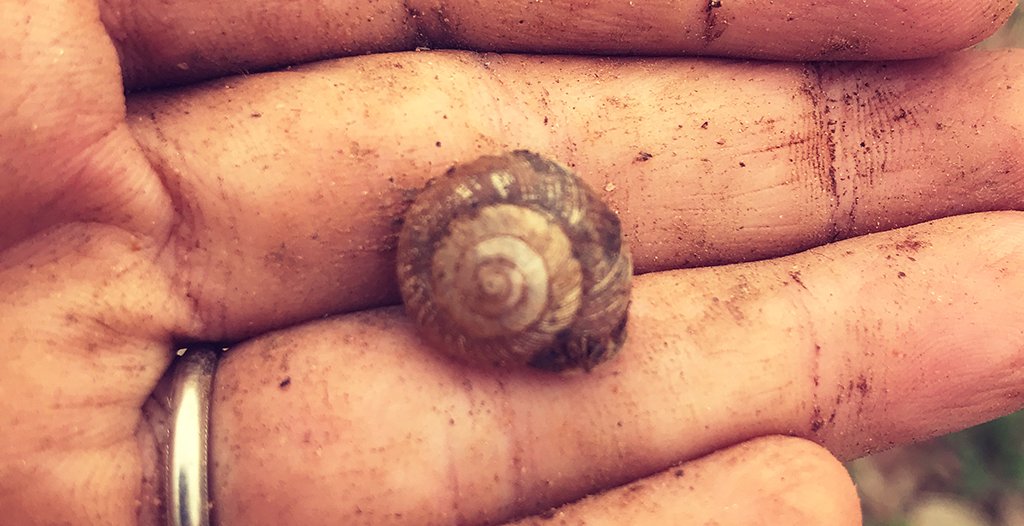 It was still freezing outside when I began digging. Years of gardening have taught me if you don’t get a head start in February, you’ll quickly find yourself overwhelmed come April. So despite the ice crusted to the soil and my bright pink fingers, I swung my snake gardening tool into the clumpy, damp dirt. Its serpent-curved neck is built perfectly for ripping out bermuda grass, making it hands-down the best garden purchase I’ve ever made. The cold soil was rich and loaded with the composted horse manure I’d added last season. We grow on red clay, and every year is a work in progress to get the soil into a healthier configuration. We use composted manure, green waste, straw and, most recently, insect frass (a fancy word for insect poop). But no matter what kind of leftover magic we put into the dirt, the real transformer is time. Building up the soil is not an overnight job.

As I was pulling out the remnants of tenacious bermuda grass (sincerely, HOW is it still everywhere?!), I found an empty snail shell buried in the dark dirt. I turned it over in my hand, peeking inside to make sure it wasn’t home to a tiny spider or worm who’d recently take up residence. It wasn’t much bigger than the tip of my finger, but I could easily make out the intricate, circular lines and swirls that formed its outer layer. Those lines never began or found an ending.

Anyone who knows me knows I have been obsessed with snails and turtles for as long as I can remember. The juxtaposition of hard outer shell and inside squish is just too convenient a container for all manner of inner ponderings. As I have grown older, I’ve long since realized that the metaphor of “strong on the outside, soft on the inside,” is way too simple of a concept to be put to any real, abiding use. It’s a black and white metaphor of binary human concoction. Snails are contradictory as we all are, and what is strong and what is soft is filled with nuance and interpretation. I feel that more and more each year.

I slipped the snail shell into the bib of my overalls and got back to work. A few minutes later I found another. And then another. By the time I’d finished my digging, I’d found five empty shells. Now might be a good time to tell you that I’d started my morning gardening thinking about nuclear war and wildfires and civil war and poverty. An hour later, these tiny discoveries left me more focused on the life and death of tiny, dirt loving creatures I barely know. I thought about my growing children and my daily re-commitments to love them just as they are in every cycle of life. I thought about how when all else seems lost, you still have to eat. Gardening is a labor that turns us back toward the next right step.

According to my research, there are several reasons I may have found multiple snail shells that day. It could be that something was off in my soil and they got sick. It could be that my chickens found them and ate them. It could be that our garden dirt is just such a great place of healthy microbial abundance that it brought allllll the snails to the yard. And for some of them, it was just their time to go. Whatever the case, the shells redirected my thoughts to the decomposing and life-giving soil right in front of me and away from the anxieties of the world. It reminded me that I garden not to find answers but to find some manner of peace. I used to wish those were the same thing. I’m trying to learn to accept that they are not.

Let me be clear. This is not a column saying we should only focus on what’s in front of us, despite the horrors of the world. It’s not a piece of writing saying we can’t possibly dream or work toward a better world and to just stay small, focus only on our own families, and tune out the world. That kind of thinking only lets the horrors grow. We all have a role to play in building a better world, and we have a generational responsibility to keep to it. This is a column saying that gardening isn’t here to fix the world, but it can feed you, and those around you, while you’re here.