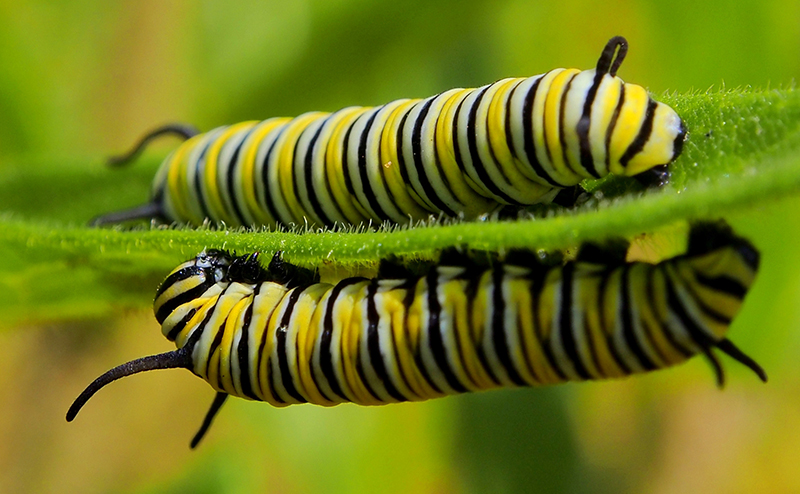 A few weeks ago I was taking a walk with my children when my son spotted a monarch butterfly high above us. In the coming days, we began to see them everywhere. They stopped for a drink at the few remaining zinnias in the front yard; they circled the echinacea and black-eyed Susans, and they hopped from the bee balm to the hyssop. Monarchs make their way through Arkansas every fall, appearing in late September and peaking in number sometime in early to mid-October. Even now, you’re likely to see a few stragglers, especially on warmer days. Deep orange like the mums blooming in our front yard, and outlined in black with tiny white dots at the tips of their wings, these tea-cup sized fliers appear so striking against the sharp autumn blue skies.
The monarchs we see here in central Arkansas were born east of the Rocky Mountains, sometimes as far north as Canada. They’re all headed toward the Gulf Coast and on to the highlands of central Mexico where they’ll stay until spring. They can travel up to 50 miles a day, making stops along the way in gardens across the U.S. When they reach the forests of Mexico they’ll cluster on evergreen trees with as many as twenty million butterflies gathering in each grove. By February they’ll be ready to mate, and by March they’ll start flying northward again in search of milkweed plants upon which to lay their eggs.
A monarch butterfly’s life is short. Though we might like to think the monarchs we see in the fall are the same ones who came through last spring, they’re actually their great, great grandchildren. Monarchs mate and reproduce on a four-generation cycle, with each fourth generation making the long intercontinental trek. Though generations removed, this long-haul traveling fourth generation of monarchs inherently know the migratory route from Canada to Mexico. Scientists who study and tag monarchs say subsequent generations return to same grove each year; sometimes even the same tree.
I first became interested in monarchs back in 2008 when my mother was dying. I had always loved the smells and colors of fall, but I was typically too busy going and doing to pay much attention to the movement of tiny creatures. But both my mother and grandmother loved to watch butterflies, and that year—the year I sat at my mother’s bedside and began to learn the importance of being still—my entire life shifted. For the first time since childhood I grew curious about butterflies. I learned to take time to just stand in the garden and watch as they made their way through our yards. In that time of great loss, the movement of an intergenerational, migratory, ever- metamorphosing creature was about the only thing that made sense.
Since then, I pay close attention to when the monarchs  pass through; I talk to my kids about their life cycles and journeys, and I’ve made it a priority to plant the a few different varieties of the milkweed species upon which these creatures depend.
In recent years, monarch numbers have been decreasing rapidly. Scientists have a number of theories as to why this is happening but one thing is certain: they’re losing both their wintering grounds in central Mexico and their egg laying sources here in the United States. Milkweed, the only plants upon which monarchs will lay their eggs, is decreasing each year as land becomes developed and wild plants are replaced with seeded lawns, pavement, and cultivated varieties of plants. Butterfly bushes and other species of cultivators are often marketed as butterfly loving plants, and while it’s true that monarchs do enjoying feeding from a multitude of flowering species, they’ll lay their eggs only on milkweed. If we want monarchs coming back each year we have to make sure there’s milkweed in our communities.
You can do your part by learning to identify milkweed and leaving wild growing milkweed patches undisturbed in pastures, fields and near your homes. If you live in town you can plant milkweed in your home gardens and around your places of business. They’re perennials and easy to care for once established. Milkweed comes in a variety of colors. You can order seed from a number of heirloom and wildflower seed companies. You can also purchase them from wildflower nurseries, such as Pine Ridge Gardens near London.
It might not seem like much, but actively supporting insect habitat is a an investment in your community’s future. As the monarch most certainly knows, what happens during our generation will surely influence the next. It’s easy to overlook the tiniest of things, and far too often we’re too busy with life’s trivial concerns to pay heed to the interconnectedness we all share. May we never get too distracted to overlook these creatures as they pass through.
If you want to learn more about supporting monarch habitats, visit me online at www.boileddownjuice.com for a list of links and more information. Do you watch the monarchs? I’d love to hear about it!