Stand Up. Stand Out. 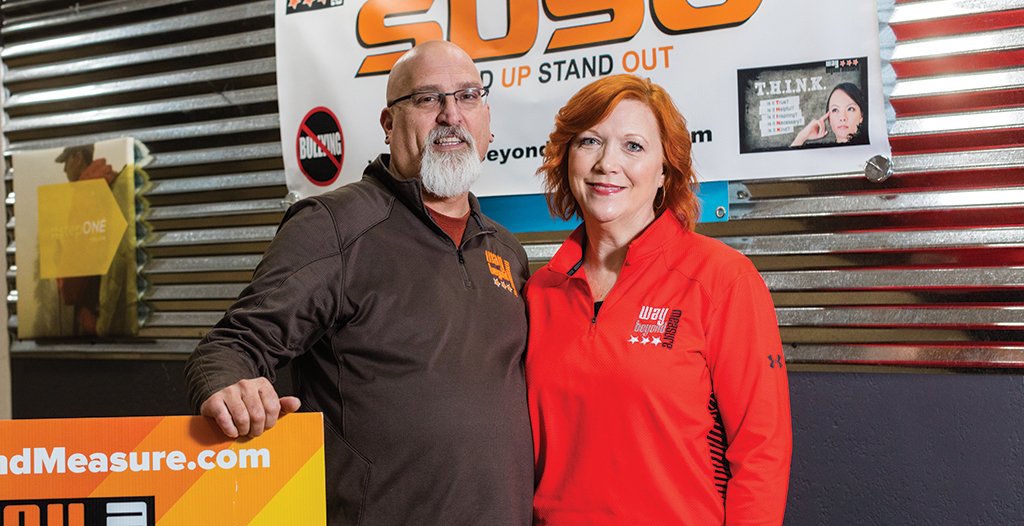 Kids and teenagers usually look forward to school assemblies because they get out of class for an hour. It’s a stretch of time when they don’t have to focus on anything. But assemblies for Way Beyond Measure, a nonprofit ran by Coach David Verdu and his wife Ranaye based in the heart of Russellville, are different. David generates a buzz.

Ranaye says that one key to the program’s success is that David has a special bond with kids. “In between programs he talks to them, has lunch with them,” Ranaye says. “He plays on the playground. He makes connections with them in a way where he can inspire, lift up, and encourage them, not just with themselves but also with other people.” It’s a rare gift, and it’s amplified by the Verdu’s dedication. “We never push things underneath the rug,” David says. “We take everything very seriously. We stick with them and never bail on them to ensure that they’re on the path to better themselves.”

On a rainy Wednesday afternoon I sat in the Verdu’s cozy kitchen, their hearts and hopes spread out on the table in front of me. We had an easy banter (and I got to pet their cats) before getting down to business.

Coach David and Ranaye are an animated and loving couple who spread positive, character developing messages to help stop the spread of bullying in schools. They’ve reached students from California to Pennsylvania and many other schools in-between. During our conversation, it was easy to see that David is a natural at captivating his audiences. “We teach them and show them how to be of good character.” David says. “I want them to understand who they are and what they can be.”

The inspiration for Way Beyond Measure can be traced back to Ranaye who noticed that bullying seemed to have become more widespread and aggressive than when she was in school. The Verdus experienced it firsthand with their children as well as the kids they foster — children who were different from what was determined normal at the school.

“[The schools] didn’t know what to do with it either,” Ranaye says. “Teachers don’t have the time to individually help everyone, and they don’t know what to do. And so we try to give them answers and the tools to help them with that.”

David’s and Ranaye’s tools include character building programs, after school programs, summer programs, teacher programs, teacher training and much more. The Verdus are committed to helping communities, schools and individuals alike. They even have educational videos on their interactive website with a text and chat number to contact if immediate help and guidance is needed.

David’s work within the schools sometimes involves recruiting students to change other’s lives. In one instance, the teachers told David and Ranaye that a little girl had no friends, so the Verdus recruited other girls to make her day better. The teacher wrote them the next day: “You changed this girl’s life. She smiled all day and had friends for the first time, and it was life changing.”

The Verdus also ask teachers at many other schools to have teens help them unload for the Way Beyond Measure presentation and then David and Ranaye eat lunch with the students. This helps young people see that they can easily get help and develops a bond that fosters trust between the kids and David.

For elementary classes, the Verdus have Super Character Dude. “He’s there to squish all the rumors and the echoes in the hall,” Ranaye says. The kids do a Super Character Dude Pledge and sign a banner that stands as a reminder of their promise to “stand up and stand out for myself, my school, and my community.”>>

The banners also serve as a reminder that Coach David and Ranaye will return. “If possible, as soon as we can,” Ranaye says. “We come back to them.”

The high school program is a little more heart wrenching with a few more tears, as the program really gets to the core of bullying and the effects it can have on others. “We have stories from every place and kids coming up with things that have happened,” Ranaye says. This openness points to the connection David has with the kids, that they’re comfortable enough to talk about darker things that have happened to them. The Verdu’s offer the comfort that children need to make that last push for help before the worst happens, ensuring that the children don’t feel left behind or forgotten. They make special connections with the kids and remember them when they see them again. Trust built during these thoughtful interactions leads to solutions.

Dissolving old misconceptions is one of those solutions

The stigma attached to seeing a counselor is something the organization is fighting against. Shedding this stigma is important because the alternative is terrible. Children who are deeply hurt emotionally, and unequipped to deal with the pain, are often children who hurt themselves or even end themselves. Ranaye says that professional help is the best possible way to avoid these tragedies. Helping young people uncover their repressed feelings is the first step on the road to their recovery. It’s not tattling if it’s saving their lives.

The Verdus have ideas for expansion within Way Beyond Measure, some of them not too far in the future and already in the works. Right now, they’re working on recruitment of young adults to train in Way Beyond Measure’s programs. Having multiple teams means they can travel to many places almost at the same time across the country.

It all boils down to simply providing children with the tools to stand up for their friends and for themselves. It’s also a program designed to inspire young people, to encourage kids to strive to be who they want to be. Stand up and stand out— it’s a message for everyone and every day. David did a radio show about the program during the holidays and was asked what people could do for others during that time, specifically. “It’s not just that time,” David says. “People talk about making sure you get out and say Happy Holidays, but what about January 17? What about February 4?”

“I don’t think our goals will ever be achieved until I know that all the schools are safe,” David says, “until people’s lives, hearts, minds and attitudes have changed for the positive.” The Verdus are pleased with how far they’ve come ,though. They’ve never given up, and tell everyone they see the same thing: Don’t give up. Strive for your dreams and for what you believe in. It’s a message of love and self-development.

And the message is spread with hope and enthusiasm. As a nonprofit organization with plans to grow, donations are always appreciated. Funds are used to further the knowledge of students and communities to help whether it be through individual character development, anti-bullying programs or teacher assistance. Even, as David said with a teasing smile, birthday parties.

Fittingly, the last thing the David and Ranaye said before I left their humble home — Don’t hesitate to call.l