The creatures that time forgot 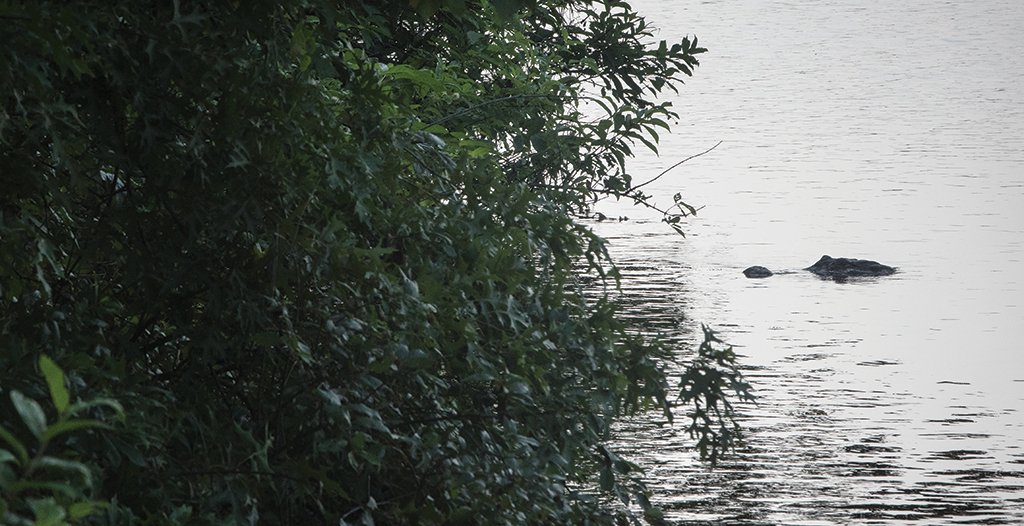 SHADOWS ARE POWERFUL, TRANSFORMATIVE entities in the mind of a teenager. None more so than those encountered while waist deep in quiet backwaters with a fishing pole in hand. But even as fading light filtering through cypress limbs turned many a log into something with teeth, I could always settle the nerves by telling myself it was just folklore. Those old coots gathered at Lucky Landing Bait Shop were just trying to scare me. We were way too far north for alligators.

I grew up in Atkins, a small town just north of the Arkansas River in the west-central part of the state, and as a kid, I heard several stories about alligator encounters in the area. I mostly pooh-poohed the tales, but those words often came back to haunt me as I slogged through the Arkansas River bottoms gigging frogs or waded a muddy creek for largemouth bass. And as it turns out, the old coots weren’t spinning yarns.

Unlike legends of the infamous black panther, the Ozark howler and even Sasquatch within Arkansas, American alligators are definitely real, and they are definitely here in at least 45 of Arkansas’ 75 counties, with the densest concentrations appearing in the southern half of the state. Still, most people are shocked to learn that large predatory prehistoric beasts are often found very close to home.

As members of the Crocodilia order, American alligators (Alligator mississippiensis) are classified as reptiles, but it’s complicated. They are, in fact, most closely related to birds and dinosaurs, and more distantly related to lizards, snakes and turtles. Alligators have likely been residents of what is now Arkansas for as long as they’ve been a distinct species in North America, which is somewhere around 8 million years. But by the 1960s, the alligator had found its way onto the Endangered Species List throughout the Southeastern United States. Federal and state protection, as well as restocking efforts, helped bring the alligator back from the brink.

Here in Arkansas, most alligators populating our waters are descendants of Louisiana alligators, or since they can live up to 50 years, possibly even original transplants themselves. Between 1972 and 1984, the Arkansas Game and Fish Commission stocked 2,800 Pelican State gators in the species’ presumed historic range. The stockings were wildly successful—so much so, in fact, that the AGFC introduced a limited-permit alligator hunting season in 2007. But during that 12-year stocking period, the AGFC also sprinkled a few alligators outside the historic range at the request of private landowners as a form of beaver control. This is likely why alligators sometimes show up in unexpected places. Like within the city limits of Russellville.

DESPITE THE RUMBLE of 18-wheelers on nearby Interstate 40 and buzzing bass boats on Lake Dardanelle, there is a Cretaceous feel to the Bona Dea trails in Russellville. Paved paths wander through the swampy bottoms of Prairie Creek before it empties into the lake. Moss-barked cypress and swamp oak shade the calm waters as wood ducks scuttle through the reeds and cottonmouths bask in sunny openings. The trail itself runs within feet of the swamp in several locations, touching a protected pocket of wild here in the largest town between Conway and Fort Smith. Despite the people and nearby bustle, it’s not totally surprising that an armor-plated relic lives among the herons and dragonflies. Given the atmosphere, it’s expected.

My gator guide at Bona Dea is Jesse Hays. Jesse is what you’d call a high-energy person. Slight and wiry with attentive eyes and a pleasing timbre in his voice, Jesse probably burns more calories during our conversation than I will during the hike. An Atkins native who moved off, then found his way back home, Jesse is the store manager at Harbor Freight in Russellville, but that’s just his day job. Anytime he can find the time—“Basically, anytime I’m off work, I’m in the woods or on the water with a camera,” says Jesse—he’s chasing something wild, whether thunderstorms or critters. Jesse knows the River Valley alligators better than anyone.

Like many rural Arkansans, Jesse grew up hunting, fishing and hearing a lot of tall tales around the campfire. And like me, he recalls hearing stories about area alligators as a youngster. “I can remember being with my dad and his friends, and I always heard a lot about gators here in Pope and Yell counties,” he tells me. “So when I moved back to the area, I decided to dig into it.”

Jesse didn’t begin his search for alligators at Bona Dea, which was not stocked by the AGFC. He started in 2013 by meticulously investigating the places AGFC stocked with alligators near his River Valley home, an effort fueled by little more than decades-old information and blind faith, with a camera and a big lens. “I started looking at a couple of these areas where they said they dropped some of these alligators,” says Jesse, “taking that big 600 mm lens, standing on the banks of these small lakes and streams, racking that lens out and shooting intervals down the bank.” And he took a lot of photos based on that blind faith. “I spent probably 250 to 300 hours over the course of a year looking at photos. I was infatuated,” he says. My response is that it sounds more like an obsession, and Jesse smiles sheepishly, nodding his head. “Yeah, it probably was.”

Jesse found one alligator during that first year of searching. It took three more years to find the second.

Obviously, an alligator that doesn’t want to be found won’t be found, and most alligators don’t want to be found. Though they are apex predators, they rely on stealth and ambush for capturing food, and during the early years of an alligator’s life, they rely on stealth and camouflage so they don’t become food. Predatory fish, herons, raptors, raccoons, mink, otters and a few other opportunistic carnivores will dine on alligators until they reach a couple feet in length. Then all they’ve got to worry about are bigger alligators and humans. The worry about humans never goes away, but sometimes the tables can turn. This is, after all, an animal that can reach 13 feet in length, weigh over a quarter ton, and possesses one of the strongest bite forces recorded in the animal kingdom: more than 2,000 pounds per square inch. That’s more than enough equipment and power to make short work of a flimsy human, which is why the pucker factor can reach maximum levels for close encounters with a gator.

Jesse can speak to this phenomenon with some authority.

A few years ago, Jesse found a nesting site and some fresh hatchlings. He had observed mom and kids from a distance but decided a closer look was needed. “I’m the smart guy who gets in a kayak and got within 50 to 60 yards from her with the GoPro, and I was just going to watch them all day,” says Jesse. “Most of the time, they’ll roll out before you get close to them. I saw her go under slow and thought, well, she’s just curious. She pops up five feet closer. Then she goes under again, and I see bubbles, you know, like a turtle makes but moving faster, go right beside the kayak, and she pops up again ahead of me.” The memory appears to trigger uneasiness in Jesse even several months later. “On the GoPro, you can hear me saying a few choice four-letter words,” Jesse says with a slightly nervous chuckle.

But like with venomous snakes and spiders, the danger element associated with Arkansas alligators has been mostly overblown. “There’s been two documented attacks—I hate to say attacks—two bites in Arkansas since they started keeping records,” says Jesse. “One was a guy who stepped on a four-footer in his waders; it was a reflex bite. The other was some guys in a [bass] tournament who thought it would be funny to catch one, and it bit one of them on the hand. You know, I’m around [alligators] more than I should be, probably, and I know that if I don’t create any issues, there won’t be any.”

Obsession has turned into respect and admiration. Jesse keeps regular tabs on the alligators he knows while searching for others still hidden in the blackwater backwaters of the River Valley. He posts photos and updates about the alligators on social media. But like the guardian of some primordial secret, he keeps the locations to himself.

“I don’t post about where they are,” says Jesse. “I’ve seen people comment on pictures of this one at Bona Dea: ‘Let me run across that thing.’ It’s just lack of education, though. I was that way about snakes for a long time. I love sharing pictures of [the alligators], but I don’t tell where exactly they are.” Jesse smiles, fumbling with his canned soft drink. He looks toward the swamps of Bona Dea and then back at me with what I’d call slight embarrassment. “It sounds almost silly to be this protective of them,” he says. “But I feel like I should be.”

A week or so after the conversation with Jesse, my wife and I launch our canoe in the still waters of a known alligator haunt less than an hour from my home. I’ve been here before, and I’ve seen the alligators, though it’s been a decade. We whisper in hushed tones about the distinct feeling of being watched as we quietly paddle through tannin-stained waters. An hour of uneventful searching softens our nerves, and we drop our vigilance, just enjoying the peaceful sounds of a small lowland lake.

Then I notice what I think is a stump in the middle of the lake quietly submerge without a ripple. Finally, after another hour of hide and seek, we silently float to within yards of the alligator, which seems as curious and mildly apprehensive about us as we are about it. After a few minutes of mutual observation, the alligator lazily cruises back toward where Christine and I started our journey. It darkens into a primeval silhouette carving through the liquid reflection of a setting sun in waters seemingly forgotten by time.