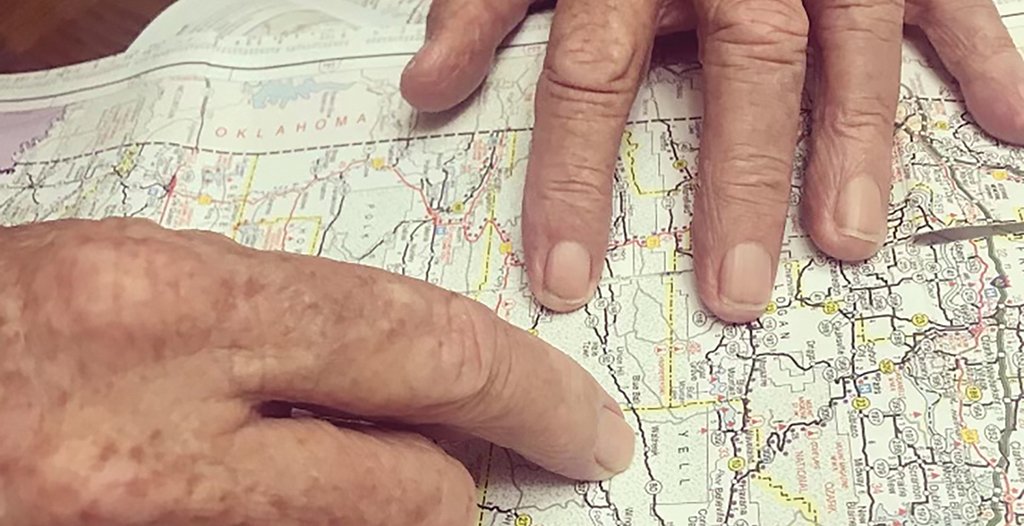 My Dad really loves maps. I don’t mean that he’s a cartographer or even a map collector in the traditional sense. I mean he loves to study the arcs and the distance of roads, how they connect and divide and snake across the land. Let me give you a few examples. Whenever our family goes out of town he wants to talk about the routes we’re going to take to get there. And when we return he wants to know exactly which roads we took to get back. Then he likes to talk about the roads we could have taken and how that could have altered our trip, either slightly or greatly. When we drove from Arkansas to Oregon a few years ago, I spent a lot of time thinking about how the landscape changed from Kansas to Utah. I took note of the plants growing in Idaho and Colorado, but the names of the numbered roads flew right past me. Dad, on the other hand and always ready with an Atlas, didn’t go with us on that trip, but he knew exactly what roads we could choose to get all the way from Dardanelle to Klamath Falls and back.

I always joke that he’s the only person I know who you could drop randomly anywhere in the state of Arkansas and he could immediately find five or six backroad ways to get back home. One time after we had moved back to Dardanelle from Little Rock we were at his house when a tornado warning went off.  He’s most certainly the only person I know who can listen to that robot emergency voices reading off the names of all those  little communities — Boles, Parks, Keener, Nogo, Augsburg, New Neely, Wing, Bluffton — and tell you exactly which way the storm is headed. We were in the clear that night, but I recall that there was one little community name that he couldn’t fully recall and so we got out the map to look it up. Then he got out a second, more detailed map just to make sure. Maps aren’t just for figuring out where you’re headed. Turns out, memorizing the possibilities of a map can help you figure out what’s headed toward you.

My Dad loves all maps, but his focus has always been Arkansas, especially the smaller highways of Yell and Pope Counties and all the counties that border them.  He’s lived here his whole life and from early adulthood on until I was in high school, he worked for and worked his way up through the ranks of the Arkansas Highway Department. He helped to build and pave a large portion of the roads we know today in Yell County and also many of those in Newton and Madison counties. As a child he’d leave before the sun came up and was often out until long after dark, criss crossing the state from Pine Bluff to Jasper. I suppose spending that much time tracing and laying the asphalt ensures you either love or hate the roots of your job, and it’s clear to me that he learned to find a certain kind of magic in the endless wind of a road being paved.

As you get older you start to see yourself in your parents, and while I can barely remember the highway numbers I drive on everyday, I can tell you more than you’d ever want to know about the wildflowers that grow on some of less traveled roads. Like my father, this knowledge has been mostly self taught, a lot of time spent observing how the plants grow and a lot of time poring over books someone else wrote.

The other night we were over at Dad’s and his wife’s house when we started talking about some of the other places in the western end of Yell County. I’ve recently found myself really fascinated with that area, especially the Fourche LaFave river and the where Yell County and Scott County meet. Part of this fascination has to do with the low population and an abundance of forest land and native plants. Though I love the delights of a large city, at the end of the day I’m growing into the kind of person who could probably thrive living miles down a private dirt road.  That evening we talked about how my Aunt Rosa — a woman who always wore her long, long hair in a tight black and gray bun — lived in Waltreak, another community west of Sulphur Springs, closer to the Scott County line. He mentioned that she was from over around “Dutch Creek,” a place that some modern maps don’t seem to name anymore. This led to a conversation about that one time when I was in college and we took a long drive out on the forest service roads of central Yell County and suddenly found ourselves with a flat tire in the middle of nowhere, somewhere out by Long Branch. Dad had recently had a heart stent put in, but he wouldn’t let me help change the tire. I remember thinking to myself that if he passed out way out here, I’d never figure out how to get home. Thankfully, all was well that day. But the story sticks with me. Partially because it was scary; partially because it was a moment when I realized the depth of his knowledge and the lack of my own, and — looking back now, decades later — partially because I was already starting to realize I wasn’t sure I wanted to live in a place where I could easily be found, someplace where the roads on the map get really skinny the wild plants and trees and creeks far outnumber the people.